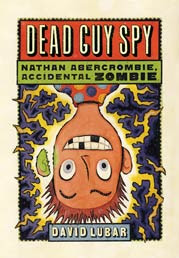 I was first introduced to Nathan Abercrombie last fall. Since then, David Lubar has kept the books in this popular series rolling off the presses. I recently finished the second book, Dead Guy Spy, and the third book, Goop Soup.
In Dead Guy Spy..."Nathan is approached by the secret organization BUM—aka the Bureau of Useful Misadventures—which offers him a cure in exchange for his help. Nathan jumps at the chance to become the world’s first zombie spy, but soon discovers that BUM may not be quite what it seems. Can Nathan trust them? Or is BUM’s offer too good to be true?”
And in Goop Soup ..."Nathan is just getting started with his training for secret organization BUM--the Bureau of Useful Misadventures--when greasy green globs of goop start oozing from every faucet in town. Gross! BUM asks Nathan to investigate, but he's not so sure he's ready for his first mission. Things get even worse when Nathan's mother makes him a doctor's appointment. His doctor is sure to notice he's dead. Is Nathan's life as a half-dead zombie spy over before it has even begun?" 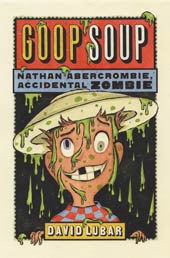 I know middle-schoolers will continue reading this series once they start. Nathan and his friends Abigail and Mookie (yes, Mookie and his noxious gaseous self is back!) keep the ball rolling in these two books. Fun-filled and full of adventures and laughs, once you pick up the first Nathan Abercrombie book, you'll be hooked.
And believe it or not, David Lubar has the FOURTH book in the series coming out on August 31. The new book is called The Big Stink.
Happy Reading!
Mrs. T :)
P.S. Reading is like breathing chocolate air!
Posted by D.A. Tyo at 12:22 PM