Interested in a weird graphic novel? Try Coraline. Based on the novel by the same name, this is one strange story! Coraline lives with her mom and dad in a very large old house. The other tenants of the house, an old man who lives upstairs and two former elderly actresses, can never get Coraline’s name quite right. “Caroline,” they say. Coraline’s own parents seem far too busy with their own lives to pay much attention to Coraline.

So when Coraline finds a locked door with a brick wall behind it one minute and a passageway the next, she is drawn to what may be beyond this dark space. Coraline finds herself in another world much like her own...right down to her ‘other’ parents. Her other parents want to please Coraline very much and want her to stay with them...that is, if it weren’t for the other parents’ button eyes!

Coraline goes back to her real apartment only to find her real parents are missing. Upon finding out that her other mother has trapped her real parents and hidden them somewhere, Coraline is desperate to find them and return things to normal.

This is one strange story! After reading the graphic novel, why don’t you pick up the original novel and read that one. How do the two compare? I’ll be waiting to see who takes me up on this challenge! 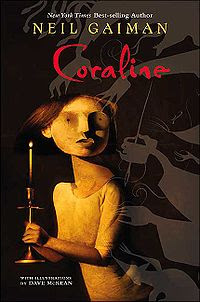