Are You a Wimpy Kid Fan?

If you're a DWK fan, then you will be thrilled to know that Jeff Kinney is taking his 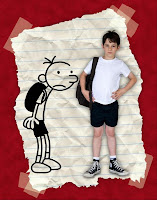 popular series to the movie screen! Yes! I said MOVIE!

Opening April 2, 2010, is "The Diary of a Wimpy Kid" movie. It will be live action with bits of animation in it as well. Jeff Kinney has been heavily involved in the process of making this film. To view an article about Jeff Kinney and the making of the movie, click HERE.

To view a trailer of the movie (too funny!), click HERE.

**Book five is coming out in the fall. It will detail the last year of middle school for Greg.

Out in bookstores in March will be The Wimpy Kid Movie Diary. "Go behind the scenes with Jeff Kinney and the making of the "Diary of a Wimpy Kid" movie! If you've ever wonde

red how a movie gets made, you're not alone. Author and illustrator Jeff Kinney didn't know either, but when his bestselling series, Diary of a Wimpy Kid, was turned into a live-action movie by 20th Century Fox, he learned how a book gets adapted into a major motion picture. Complete with photographs, script pages, storyboard sketches, costume designs, and original art by Jeff Kinney, The Wimpy Kid Movie Diary is the perfect companion to the bestselling series."--from Amazon

P.S. Reading is like breathing chocolate air!
Posted by D.A. Tyo at 7:09 PM