A Diamond in the Desert 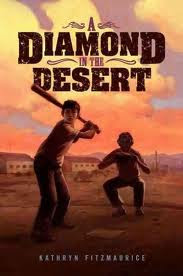 For Tetsu, baseball is so much more than just a game.

On December 6, 1941, Tetsu is a twelve-year-old California boy who loves baseball. On December 7, 1941, everything changes. The bombing of Pearl Harbor means Tetsu's Japanese-American family will be relocated to an internment camp.

Gila River camp isn't technically a prison, but with nowhere to go, nothing to do, and no time frame for leaving, it might as well be. So when someone has the idea of building a baseball diamond and starting a team, Tetsu is overjoyed. But then his sister gets dangerously sick, forcing him to choose between his family and his love of the game.

An ARC of A Diamond in the Desert provided by *Worch Library* went in and out of my sixth graders' hands this past spring. I wanted to read it, yet it was never on the shelves to pick up for myself. Waiting until the summer was hard but very rewarding as I finally had the chance to read through Fitzmaurice's latest book.

No wonder this book was always checked out from my classroom! It has everything my sixth graders want in a book.

1. Baseball - Need I say more?
2. World War II - I have readers who seek out each and every historical fiction read on my shelves that take place during World War II.
3. A Fantastic Beginning - I only had to read the first page to hook readers into this book.

Gila River was the place where my eight-year-old sister, Kimi, learned to go to the bathroom with a white cotton pillowcase pulled over her head. It was Mama who came up with the idea after a week of Kimi refusing to go.

The pillowcase, Mama said, took the place of the walls and doors that weren't in the latrine, and gave some privacy from others sitting close by trying to use the bathroom, too.

"No one will see you through it," Mama promised. "Yes, you'll be able to breathe. The air can get in."

Then she stood for three long minutes with the pillowcase over her own head to prove this.

4. Short chapters - This is such a lure for my students. (I don't mind short chapters either!)
5. A great story - I was pleased to find out by reading the Author's Note that many of the events in the book really happened.

I will definitely be booktalking A Diamond in the Desert this fall. I will have no problem lining up interested students to read this one.

Visit the author's website HERE. Click HERE to view the book trailer made by a librarian that I will use in the classroom. I love the images that make up this trailer!