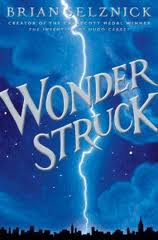 I am...WONDERSTRUCK. and I know my students will be as well when they put their hands on this masterpiece.

Thanks to a wonderful librarian at Worch Library, I was able to read an ARC of Brian Selznick's new book due out September 13, 2011. In a letter included with the book, Selznick writes, "Over the course of nearly three years, Wonderstruck evolved into a book that tells two separate stories, one in words, which takes place in 1977, and the other in pictures, which takes place fifty years earlier in 1927. The two stories weave back and forth and ultimately come together. Each story echoes and informs the other one; so in essence, you will find yourself reading three books--the one with words, the one with pictures, and the one created by their intersection."

Indeed, while reading this book, I was enthralled with Ben's story (1977) as well as Rose's story (1927). Selzinck did a superb job creating each one of these tales while masterfully weaving them both together.

This will be one book in the fall that I will not have to push my sixth graders to read. Many a student has been lured into reading by Selznick's The Invention of Hugo Cabret (including my own daughter--see below). I have always pulled The Boy of a Thousand Faces and The Houdini Box for those students who enjoyed Selznick. I will now have another go-to book in Wonderstruck.

With over one hundred more drawings than The Invention of Hugo Cabret, Wonderstruck is indeed the kind of book that after reading, you want to go right back to the beginning and read it again. 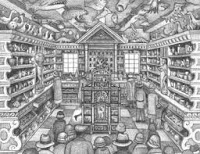 Older readers will want to read the Acknowledgments at the end of the book as Selznick offers insight into the writing of the book. In this section, he gives me reason to read Wonderstruck again AFTER reading From the Mixed-up Files of Mrs. Basil E. Frankweiler by E.L. Konigsburg. Selznick says, "Of course, any story about kids who run away to a museum owes a debt of gratitude to E.L. Konigsburg's From the Mixed-up Files of Basil E. Frankweiler. In order to pay back that debt, Wonderstruck is filled with references to Konigsburg and her book. How many can you spot?"

P.P.S. I credit Brian Selznick and Hugo Cabret for turning my daughter into a reader. It was Hugo that turned her on to books and what they had to offer. She quickly grabbed up Wonderstruck and devoured it! Here is what she had to say...

"I decided to read Wonderstruck because I read The Invention of Hugo Cabret when it came out and LOVED it. When I heard that Brian Selznick had a new book coming out with the same format as Hugo Cabret, I wanted to read it and have the book that second!

"Brian Selznick does it again! His new book Wonderstruck is two stories in one. One in the words, and then one in the pictures. But there is also a third story within the words and pictures. When I was reading it, it was like a silent film on paper. My favorite part was when the two stories turned into one. I will be recommending it to readers who liked Hugo Cabret and who like other graphic novels." (Thanks, Taylor!)