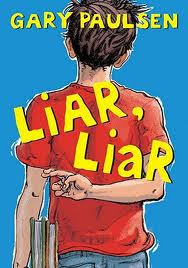 "If you ask me, people who say honesty is the best policy are just terrible liars."

"Kevin has a big talent. Some might call it compulsive lying. He calls it common sense. Kev doesn't mean to cause trouble by lying all the time; he's just trying to make everything easier for everyone (and himself). And, of course, a few harmless, um, falsehoods are crucial to his plan to convince Tina that he's the perfect boyfriend for her."

In Gary Paulsen's new book, Kevin is a fourteen-year-old who is determined to become the boyfriend of Katrina Marina Zabinski (kah-TREE-nah mah-REE-nah zah-BIN-skee). Even her name sounds like music to Kevin's ears. Kevin devotes most of one week spinning lie after lie in order to move closer to Kevin-meets-Tina status.

However, as the week continues, things begin to unravel both at school and at home. Kevin's lies eventually get the better of him; Kevin needs to make amends and make them fast!

Can Kevin apologize to everyone harmed by his lies? Will everyone accept his apologies? Will Kevin learn any life lessons along the way?

In Liar, Liar, Gary Paulsen has written a book reminiscent of The Amazing Life of Birds (The Twenty-Day Puberty Journal of Duane Homer Leach). See my review HERE. Both books are full of middle grade boy humor. Really. They. Are. Perfect for mature sixth graders and older middle school readers.

If Liar, Liar meets the bill, make sure to check out the companion book coming out in July called Flat Broke. Kevin is "back for another round of mayhem and misunderstandings in this financial comedy of errors."