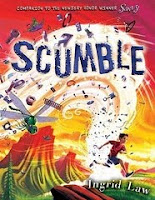 Scumble, the sequel to Savvy, is being released August 24. What a great 'Welcome Back to School' reward! Here is a blurb about the book from Ingrid Law's website:

Ledger Kale’s savvy is a total dud—all he does is make little things fall apart. So his parents decide it’s safe to head to Wyoming for a family wedding, where it’s soon revealed that Ledge’s savvy is much more powerful than anyone thought. Worse, his savvy disaster has an outside witness: Sarah Jane Cabot, reporter wannabe and daughter of a local business man. Just like that, Ledge’s beloved normal life is over. Now, he has to keep Sarah from turning family secrets into headlines, stop her father from foreclosing on Uncle Autry’s ranch, and scumble his savvy into control so that, someday, he can go home.

Starring a cast both fresh and familiar, Scumble melds heart and humor with the legendary Wild West."
The paperback version of Savvy is coming out on March 23. In the back of this paperback edition, Ingrid Law will provide the first chapter of Scumble for interested readers.
I can't wait!
Happy Reading!
Mrs. T :)
P.S. Reading is like breathing chocolate air!
Posted by D.A. Tyo at 5:02 AM