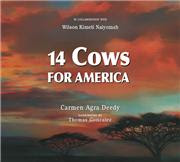 “Because there is no nation so powerful it cannot be wounded, nor a people so small they cannot offer mighty comfort.” This line from 14 Cows From America was the perfect end to a powerful book.

There are many stories about September 11, 2001, yet none quite like this one. Written by Carmen Agra Deedy and illustrated by Thomas Gonzalez, 14 Cows From America tells of the story of Kimeli who visits his Massai village in Kenya. It is nine months after the terrorist attack has taken place. He tells the horrors of September 11 to his tribe. They are moved. Kimeli wishes to offer his only cow to the American people, a gift sacred to the Massai; the cow is life. Kimeli asks the elders for their blessing which they give, but there is more that they wish to do.

I was moved by Kimeli’s story and the gift of the Massai. The story was elegantly told with a richness and powerfulness that matched that of the Massai. The illustrations were colorful and powerful themselves. Twice I was moved by the illustrations. The first was of the picture of Kimeli’s mother welcoming him home. The last bit of text on the page reads, “He thinks of New York then. He remembers September.” My eyes then go directly to the right and down just a touch where the New York skyline is represented behind the illustration of Kimeli’s mother and other tribe members. Perfect placement of text and illustration!

The second time I was moved by the illustrations was on the last page. The reflection of the Twin Towers in the pupil of an eye. Very powerful. Very memorable. Just like this story.

You should read this picture book to learn about the Massai whom seem very different from ourselves yet who obviously are very connected with the hearts and minds of Americans. It is a great book!

P.S. Reading is like breathing chocolate air!
Posted by D.A. Tyo at 5:37 PM