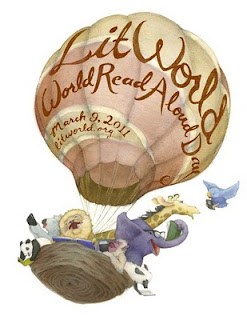 "Nearly 1 billion people entered the 21st century unable to read a book or sign their name. What would you miss most if you could not read or write? Imagine your world without words."
Today, my students and I celebrated World Read Aloud Day. We shared the power of words, of reading, of sharing stories with each other. To help us celebrate, we invited several fabulous authors to read aloud to us via Skype. We cannot thank these authors enough for spending time with us, for sharing aloud their words, for encouraging us as readers and writers.


Sarah Albee began our morning Skyping with us from Connecticut. What sixth grader would not be interested in reading Poop Happened: A History of the World from the Bottom Up? "From the world's first flushing toilet invented by ancient Minoan plumbers to castle moats in the middle ages that used more than just water to repel enemies, Sarah Albee traces human civilization using one revolting yet fascinating theme." The students were engrossed with Sarah's reading of the knight's squire and the task that was required of this position. Sarah kept the students listening as she shared other bits and pieces from her book. From the groans and "eewwwww!" noises that erupted from the classroom, I knew the students were hooked. I am going to have to purchase multiple copies of this book. The one copy in my classroom will not be enough!

Still early in the morning, the students had the extreme pleasure of hearing Sarah Prineas read aloud from her book, The Magic Thief. Sarah shared with the students how she has been influenced by J.R.R. Tolkien. Sarah also shared that Laura Ingalls Wilder influenced her writing. In the writings of Wilder, she was often writing about food! Indeed, as Sarah read through the first chapter of The Magic Thief, we were hearing about pork chops and potatoes and berry pie dusted with sugar. 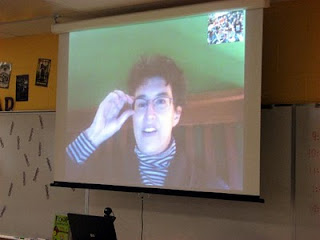 Sarah had several Skype visits planned for the day. In fact, late into the evening Sarah was still Skyping with students in China! We appreciate Sarah taking time to read aloud to us!

When my second block of LA students arrived mid-morning, they had heard the buzz of excitement from the first block students in the hallway. The incoming students were eager to have time with an author and were mesmerized by Laurel Snyder. Laurel read aloud from Penny Dreadful,"the perfect book for girls and boys who look to find adventure and magic in surprising places." 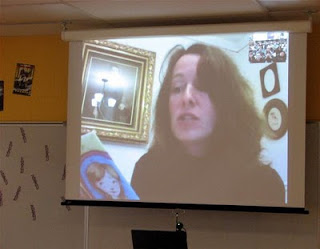 After reading aloud from Penny Dreadful, Laurel had a treat for us! Laurel read from her new book to be published in September, Bigger Than a Breadbox. She was reading from this book for the first time and admitted to us that she was nervous about it. She need not have been nervous! It was a powerful first chapter describing the main character listening to her parents 'fight' but in an eerily calm manner. Words were well-chosen and bits of the chapter stayed with us...

'a sweaty $5.00 in my fist'
a 'big list of angry''
'I could do this just as easy without you.'
'sitting on lumpy shoes'
'smelled like dirty hair and peanut butter'
Bigger Than a Breadbox is one book I will look forward to putting on the shelves in my classroom. The small morsel that Laurel let us taste was one that we enjoyed, and we would like a heap more!

By the time my third block of students came to my room in the afternoon, they knew they would be in for a treat. Donna Gephart, author of As If Being 12 3/4 Isn't Bad Enough, My Mother Is Running for President and How to Survive Middle School, is one hysterically funny lady! What an energetic person! It is no wonder that she has received the Sid Fleischman Humor Award! She even showed us the award, wonderfully heavy as it was!
Donna read aloud to us from her newest book How to Survive Middle School. Already flying off my shelf, this book is about a boy named David who wants to be famous with his videos he posts on YouTube. But first, David must deal with: 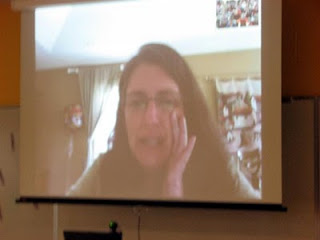 "6. Middle school (much scarier than it sounds!)
5. His best friend gone girl-crazy
4. A runaway mom who has no phone!
3. The threat of a swirlie on his birthday
2. A terrifying cousin
1. His # 1 fan, Bubbe (his Jewish grandmother)
1/2. Did we mention Hammy, the hamster who’s determined to break David’s heart?"

Wrapping up the afternoon in the most perfect kind of way were the authors of The Familiars, Adam Jay Epstein and Andrew Jacobson. These two authors had the students hooked the day before when I showed the students their video posted on YouTube. (Click HERE to see the hilarious video the authors made to promote their book.)

Adam and Andrew read aloud from their book which focuses on the magical animal companions to a wizard or a witch. Aldwyn, an alley cat, Gilbert, a tree frog, and Skylar, a blue jay, are the familiars that my students are anxious to read about. The two authors shared information that a movie is in the works. They are writing the screenplay, and the second book in the series is due to come out later this year. 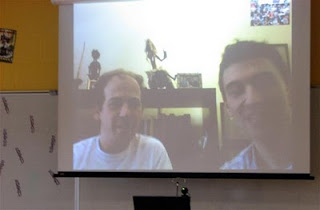 Adam and Andrew spent extra time talking with the students and answering their questions. After being asked if they remembered writing in middle school, a grade school writing was dug out of a battered folder! "Time Chase" was read aloud...a story written in grade school by Andrew! We heard about Stanley, Chuck and Wilbur going on a time machine adventure to the Civil War! What a great thing to hear these authors say, "And YOU can do it, too!"


We had a FANTASTIC World Read Aloud Day! Thank You Thank You Thank You to each and every author for taking time out of your very busy schedule to read to us, talk to us, answer our questions, and inspire us to be better readers and writers!

Thank you, authors! You rock!